For all those under the abovementioned circumstances, we have designed Everest Base Camp Heli Tour. Everest Helicopter Tour helps you reach Everest Base Camp (5,364m) in about an hour from the domestic terminal of the Kathmandu Airport.

Everest Base Camp Heli Tour begins when you fly to the Lukla Airport after taking a circumambulation of the Kathmandu Valley. During the 35-minute Kathmandu-Lukla flight, you will enjoy the aerial view of the almost all 8,000ers of Nepal including high hills and lush valleys.

Sitting at the window-seat, you will get to fly around the gigantic mountains dazzling with the first sunrays of the day. The morning views of the refreshing snowy peaks are the best scenery one can ever have in their lifetime!

The gorges, glacial lakes, towering peaks, icefalls, alpine landscapes, lush forests of Sagarmatha National Park, and many more are the rewards of helicopter tour to Everest Base Camp. The Tibetan Buddhist shrines and the Sherpa settlement areas of the Khumbu Region make your helicopter ride over Mount Everest more memorable.

Flying like a hawk over the world’s highest mountains is the most splendid things you can have in your life, right? The pilot helps you figure out the individual natural and cultural landmarks of the Everest Region during the flight over Everest. 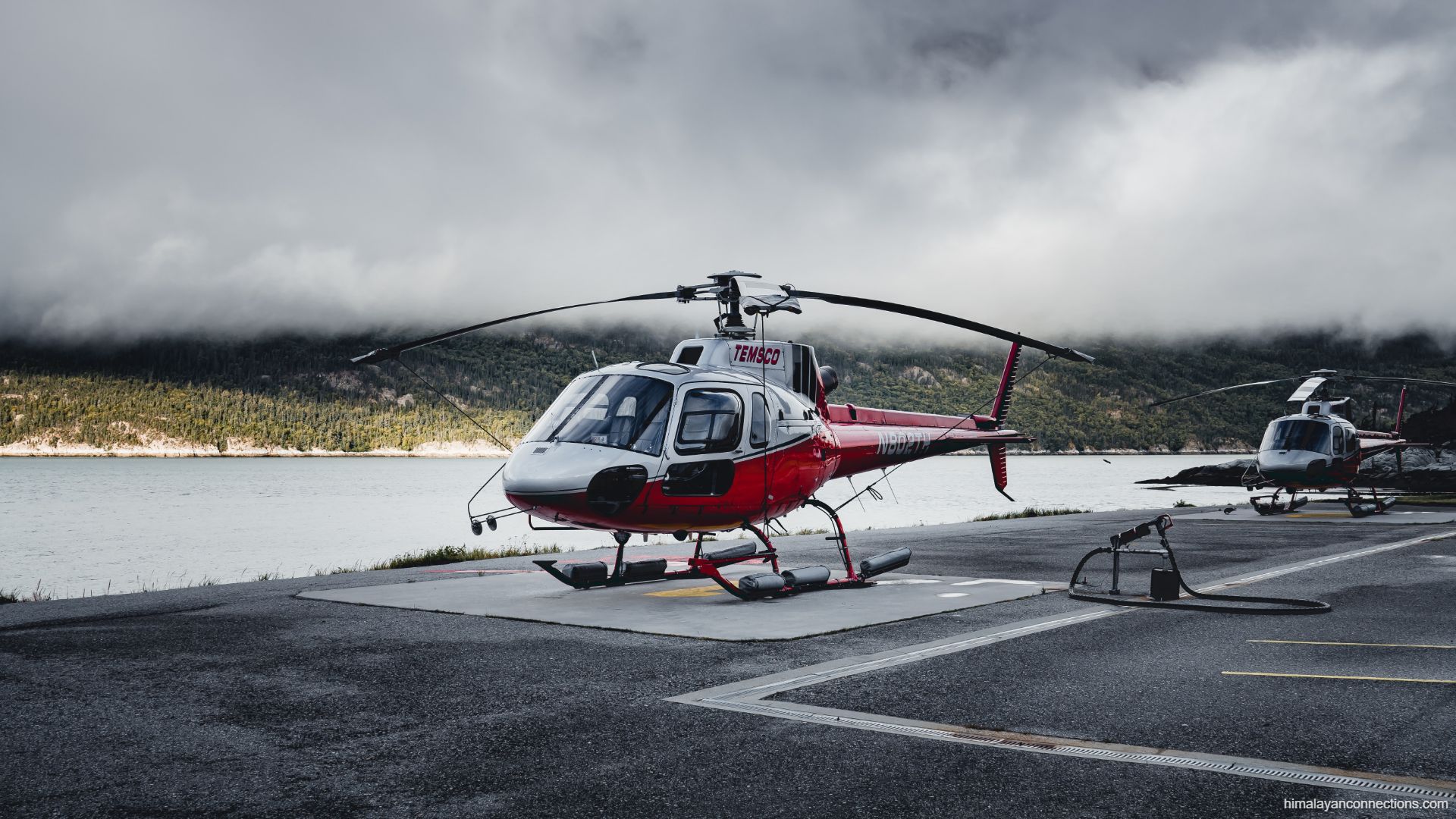 Everest Base Camp Heli Tour with Landing is a rather different experience from EBC Trek. The chopper lands once at the Tenzing Hillary Airport, the gateway to EBC Trek, Gokyo Lakes Trek, and Everest Three High Passes Trek. After leaving the fuel at the Lukla Airport, you take a helicopter ride over Everest and land at Kalapathhar (5,555m).

As you may suffer from altitude sickness, the chopper does not stop there for more than 10-15 minutes. While at Kalapatthar, you witness the closest view of the Giant Himalayas including the world’s highest Mt. Everest (8,849m).

Capture as many pictures as your camera-battery can by keeping the sparkling snowcapped peaks on the background. Enjoy the Khumbu Icefall and the Khumbu Glacier from Kalapatthar View Point as well.

Then, the chopper of your Everest Base Camp Heli Tour with Landing lands at the helipad of Everest View Hotel. It is one of the world’s highest placed hotels where the shuttle waits for about 30 minutes. You can have breakfast or lunch by observing the Giant Himalayas including Mount Everest.

Next, the helicopter lands at the Lukla Airport for refueling and flies back to the Kathmandu Airport. In this way, your Everest Helicopter Tour with Landing completes within two hours and fifteen minutes. 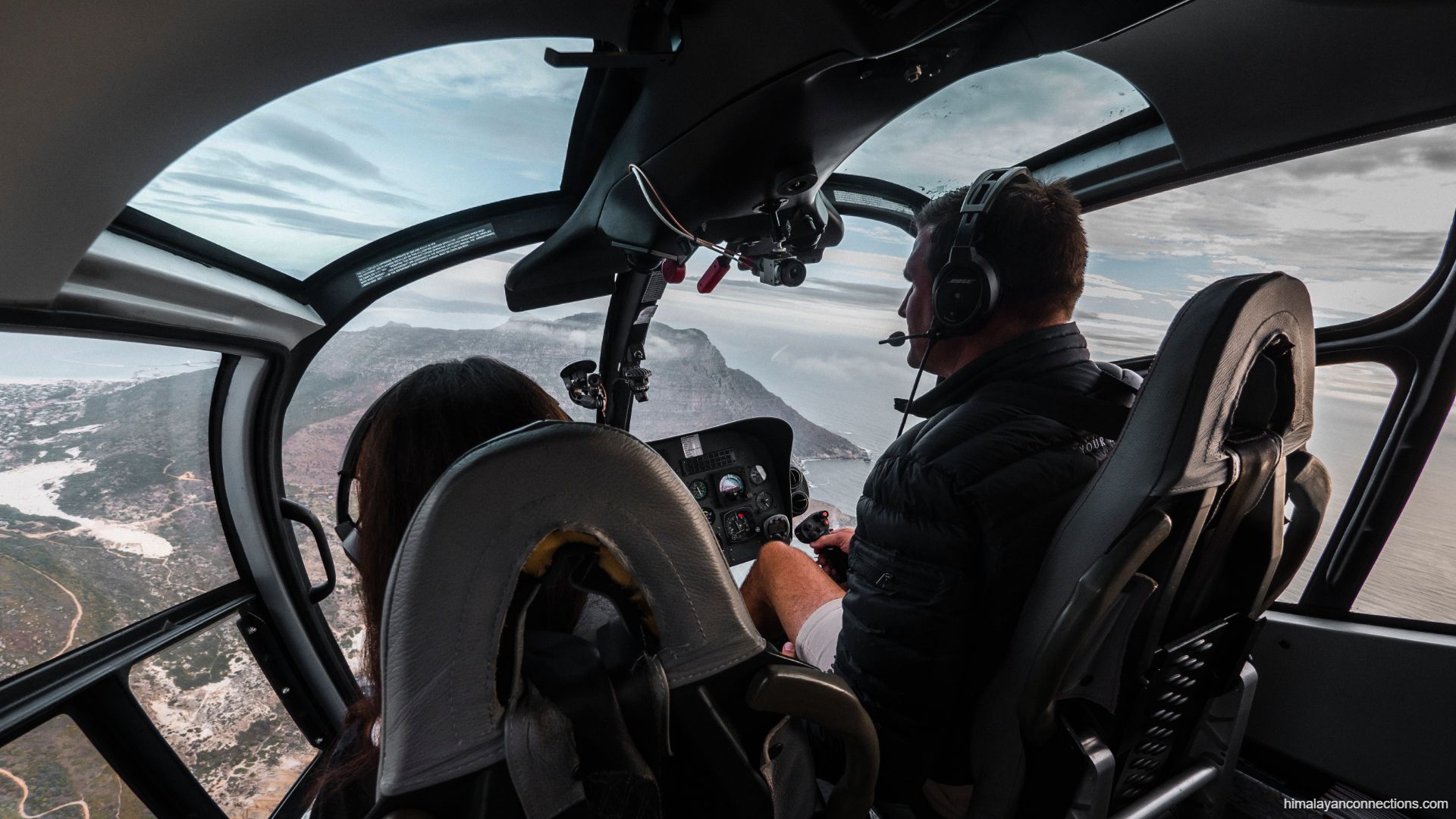 If you want to fulfill your Everest Dream in less than two hours, Everest Base Camp Heli Tour without Landing is the only option.

The chopper lands at the Lukla Airport to unload the fuel and then, flies directly towards Everest Base Camp. During the flight, what you see is just the spellbinding mountains smiling and welcoming you to their vicinity.

Flying over the glacial lakes, Sherpa villages within Sagarmatha National Park, the Khumbu Icefall, the Khumbu Glacier, and many other peaks, the chopper returns to the Lukla Airport. After refueling there, your Everest Base Camp Helicopter Tour without Landing ends as the helicopter flies back to Kathmandu.

In other words, the cost of Everest Helicopter Tour is determined by whether you share the helicopter with another group or make on your own.

A shuttle can carry maximum five passengers i.e. 5x at once during Everest Base Camp Helicopter Tour. In a private Everest Heli Tour, you must have your own group sharing both the shuttle and the price.

Even if you do a solo helicopter tour to Everest Base Camp, you must pay the entire charge on your own.

In a sharing Everest Base Camp Heli Tour, you will join another group and pay your cost divided by five persons.

On this note, Everest Base Camp Helicopter Tour Cost is higher for a solo traveler than for a sharing EBC Heli ride over Everest.

Moreover, the fog and mists in the winter season might create problem in visibility. In the rainy seasons, the heavy showers and thunderstorms can occur anytime disturbing the flights over Everest.

Everest Base Camp Helicopter Tour Best Time is in the spring and the autumn seasons. During the spring (March-May) and the autumn (September-November) the weather remains stable serving the best visibility. You can enjoy the picturesque vistas all around!

Contact Himalayan Connections for Everest Base Camp Heli Tour in the best time at the most reasonable cost.