Upper Mustang Tiji Festival Trekking begins from Jomsom to Kagbeni, the gateway to Upper Mustang Trek. You fly to Jomsom, the district headquarters of Mustang district after a flight from the Pokhara Airport. Moving along the gradually steep trails across the classic Tibetan villages, you will visit several natural caves and gompas.

Semi-arid landscapes and the majestic peaks of Dhaulagiri (8,167m) and Annapurna (8,091m) Massifs make this festival trek more memorable. The moderate to challenging trail takes you through the complete wilderness, adventure, and natural beauty of the Trans-Himalayan Region.

Upper Mustang Tiji Festival Trek is organized in either the second half of April or the first half of May. It focuses on the observation of the Tiji Festival that is celebrated for three days in the forbidden Kingdom of Lo Manthang.

Upper Mustang Tiji Festival Trek 2021 has fallen from 8th May to 10th May according to the Tibetan Calendar. According to the myth, an incarnation of Buddha, Dorje Jono had killed a demon father, who created havoc in the ancient Kingdom of Lo. Tiji Festival is observed for three consequent days to mark the victory of virtue over vice that challenged the human civilization.

The ancient gompas such as Jhampa, Thupchen, Chhoeda, Ghar Gompa, Nyamgal Gompa, etc. are the Tibetan Buddhist shrines of the Upper Mustang Region. Mustang Tiji Festival Trek lets you explore the walled city and Capital of the forbidden Kingdom of Lo.

As Upper Mustang Region is the restricted area trekking (RAT), you are not allowed to trek as a solo trekker in Nepal. You need a special permit and a professional trekking guide for a group of two trekkers.

The reason for you

On the arrival day, our representative receives you at the Kathmandu Airport and transfers you to the hotel. Overnight at a hotel.

Today is Kathmandu Sightseeing Tour and trek preparation day. Our tour guide takes you around the UNESCO World Heritage Sites. Particularly, you will visit Pashupatinath Temple, Bouddhanath Stupa, the Monkey Temple, and Patan Durbar Square. These sites are religiously, architecturally, and culturally worth visiting places for international tourists.

Upon returning to the hotel, it is time for collecting trekking gears and making other preparations. In the evening, the trekking guide gives you details of the Upper Mustang Tiji Festival Trek. Overnight at a hotel.

After breakfast at the hotel, you will be received and transferred to the Kathmandu Airport if you are flying to Pokhara. Or else, you will drive along the Prithvi Highway along the Trishuli River and the Marsyangdi River banks. During the trip, you will see the snowcapped peaks of Ganesh Himal and Manaslu Himal Ranges.

When you reach Pokhara, you will be transferred to the hotel. The picturesque vistas of the Dhaulagiri (8,167m) and the Annapurna (8,091m) Massifs are seen from the Lake city Pokhara. In leisure time, explore the beautiful sites of the Tourism Capital of Nepal, Pokhara. Overnight at a hotel.

After having breakfast, you will be transferred to the Pokhara Airport to fly to Jomsom. It is better to fly to Jomsom in the morning because, after 12:00 pm, the strong winds might disturb the flights to Jomsom.

You will enjoy the aerial view of the green hills, beautiful lakes, and towering peaks, the Kali Gandaki Gorge, and Tibetan Plateau-like landscapes. The in-flight vistas of the Dhaulagiri and the Annapurna Massifs make your journey more fascinating.

After landing at the Jomsom Airport, you will move along the Kali Gandaki Riverbed. The trail is gradually sloppy until you reach Kagbeni, the gateway to Upper Mustang Tiji Festival Trek. Overnight at a lodge.

Have breakfast before you begin today’s trek. Following the Kali Gandaki Riverbed, you move northwards from Kagbeni. You will go across a few villages such as Tangbe and Chhusang to reach a small, beautiful Chele Village.

On the way, you will visit the Gompa Kang and few caves situated on the bank of the river. The trail passes through small ridges but is well-defined and comfortable.

You begin your trek after having breakfast. In the beginning, the trail ascends steeply to the top of a small ridge. Then, it goes across farmlands cultivated with buckwheat and rice. On the way, you will also visit Rachung Cave, one of the several caves attracting thousands of tourists every year.

Your trek begins after having breakfast following a steep ascent through a ridge. Crossing the Yamada La (3,860m) and the Nyi La Pass (4,010m), you will end up at Ghami. From the Nyi La Pass, you will enjoy the semi-arid landscape of the Upper Mustang Region and appealing views of the Annapurna and the Dhaulagiri Massifs.

You walk across Tamagaon, Ghiling, Chhunggar, and Jhaite villages all of which reflect the authentic Tibetan Buddhist cultures and traditions. Overnight at a lodge.

After breakfast, you begin following the slightly sloppy trail to the top of Ghami La Pass (3,765m). Then, crossing the longest mani wall of the entire Upper Mustang Region, you move forward towards Dhrakmar. Finally, walking a gentle descent, you end up in Charang Village.

Here, you will visit a five-story White Dzong (fortress) and the Red Gompa, which stand as the major attractions of the Charang Village. Overnight at a lodge.

After breakfast, you will follow a flat trail moving upwards. The trail leads you through the landscape full of wilderness, adventure, and natural beauty. By crossing the Lo La Pass (3,950m), you will reach Lo Manthang, the walled city and Capital of the ancient Lo Manthang Kingdom.

From here, you will enjoy the majestic peaks such as Nilgiri, Tilicho, Annapurna I, and Bhrikuti Peak (6,460m). You get to observe the Tibetan culture and tradition in its most authentic form in this classic city in the semi-arid landscape. Overnight at a lodge.

The major attractions of the opening ceremony are the local dances in traditional music. It is the best time to see the local people dress in their traditional attire and jewelry. The Mustangese women look really beautiful in their cultural dress and traditional ornaments. The Buddhist monks dress in robes.

The masked dance showcases the mythical stories associated with Tiji Festival. The first day ends when a legendary figure Dorje Jono, an incarnation of Buddha kills the demon, who brought drought, famine, and plague in the Upper Mustang Kingdom. Overnight at a lodge.

After breakfast, you will move towards the Tiji Festival celebration venue. The day starts with the cultural dance performed by the Tibetan Lamas. Other attractions of the day are colorful costumes, traditional masks reflecting 12-foot horns, yaks, pigeons, dogs, etc. Many native artifacts, cultural celebrations, and local cuisines make the more memorable. Overnight at a lodge.

This is the closing day of the three-day Tiji Festival celebration. You trek to Namgyal Gompa situated on a small hilltop. The monastery stands as the court for the local community if there are any disputes between the dwellers.  The remains of the demon are dressed in the old tiger skin and attacked by bows, arrows, old guns, and catapults. This is the day when Dorje Jono had killed the demon that created havoc in the ancient Lo Manthang Kingdom. At the end of the day, you return to the lodge and spend the night.

If you miss out on an extra day for exploring Lo Manthang, Upper Mustang Tiji Festival Trek remains incomplete. So, you begin trekking towards Tinker Village after having breakfast. Lo Manthang is a historic place and a must-visit site located in the Trans-Himalayan Region. You will visit the ancient gompas and dzongs.

The most important gompas such as Jhampa, Thupchen, and Chhoeda will be explored. Tinker is the last village standing as the border between the Tibetan Autonomous Region. From this village, you will observe the flat land of the Roof of the World!

Then, you return to the hotel by enjoying the mountain scenery and semi-arid landscapes, which are also known as the Mountain Deserts of Nepal. Overnight at a lodge.

Today, you will retreat towards Jomsom by driving in a private jeep by stopping in the historic and natural landmarks. You will visit the Ghar Gompa, the most ancient monastery of the entire Upper Mustang Region. As the road track is newly constructed, it is a completely off-road journey. It takes more than ten hours to arrive in Jomsom at the end of the day. Overnight at a lodge.

In the morning, you will fly to Pokhara by enjoying the aerial view of the mountains, hills, high altitude villages, and lush valleys. After landing at the Pokhara Airport, you will be transferred to the hotel. After having lunch, you will explore the remaining places of the Lake City Pokhara.

You can try out some adventurous activities such as paragliding, zip flyer, hot air ballooning, and boating on the Phewa Lake. There are a few museums to visit in the leisure times. Don’t forget to experience the nightlife of Lakeside. Overnight at a hotel

After breakfast, you will return to the Kathmandu Valley either by road or by air. Driving along the Prithvi Highway takes nearly 6-7 hours to arrive in Kathmandu. The scenery of the small trading centers, green hills, flatlands, and the Himalayas make your trip more interesting.

After arriving in Kathmandu, you will be transferred to the hotel. In leisure, you can visit Thamel to purchase handicraft products of Nepal to gift to your people back in the home country. We will invite you to a farewell dinner at a cultural restaurant around Thamel. Overnight at a hotel.

As per your flight schedule, our representative transfers you to the Kathmandu Airport. Have a wonderful journey back to your home country! 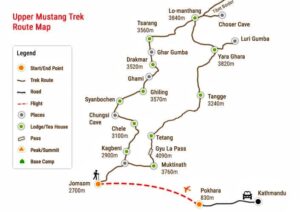 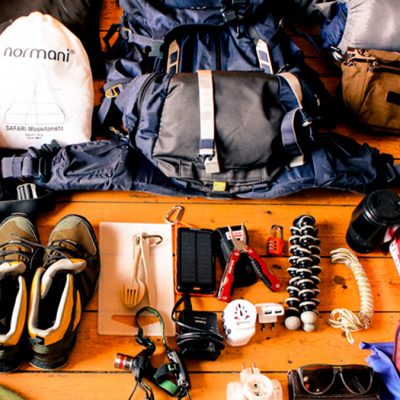 Yes, our airport representative will be there to greet you at the airport. S/he will be displaying our company signboard outside the airport terminal. Upon arrival, you will be transferred to your hotel in our tourist vehicle.

CAN I OBTAIN A VISA FOR NEPAL UPON ARRIVAL AT THE AIRPORT?

If you do not hire a trekking guide, it is possible to save a little money. My strong recommendation is that you trek with a GUIDE when exploring the amazing (…)

Nearest to Kathmandu valley flanked by the spectacularly dazzling Mt.... 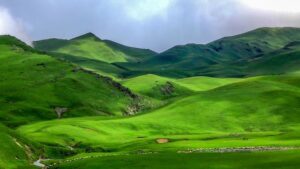 Badimalika Trek – An Escapade in the Grassland, takes you... 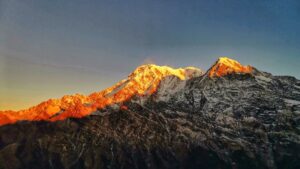 The Mardi Himal Trek is an absolutely-yes option if you...