General Fact About Nepal – Nepal is naturally the most beautiful country in the world. The Himalaya located country has landlocked territory and lies in between two giant countries China and India. The highest mountain on earth called Mount Everest is in Nepal. Not only Everest, but it also has other eight highest mountains that measure the height of above 8 thousand meters. They are Mount Everest – 8848 m, Kanchenjunga – 8586 m, Lhotse – 8516 m, Makalu – 8481 m, Cho-yu – 8201 m, Dhaulagiri I – 8167 m, Manaslu – 8156 m and Annapurna I – 8091 m.

Nepal is it has the deepest Canyon on earth. Kali Gandaki canyon with 6400 meters is the world’s deepest canyon, the difference between the level of the river and the peak surrounding it. Likewise, Kathmandu Nepal’s capital was once a lake. Another general fact is that Nepal is the birthplace of Lord Buddha. The fearsome Gurkhas are also from Nepal. Nepal uses its traditional Calendar Bikram Sambat unlike the Gregorian calendar used in the West. Dal Bhat set  (lentil soup, rice, curry, pickle, vegetables, etc.)   is a national food and Nepalese eat it two times a day.

Area and Population of Nepal 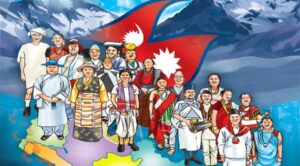 Area and Population of Nepal

Culture And Festivals Of Nepal 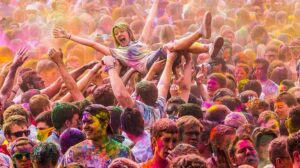 Culture And Festivals Of Nepal

There are so many ethnic groups and languages in Nepal. More than a hundred ethnic groups use their own language in Nepal. According to Wikipedia, Nepal’s diverse linguistic heritage evolved from three major language groups: Indo-Aryan, Tibeto-Burman languages, and various indigenous language isolates. According to the 2011 national census, ninety-two different living languages are spoken in Nepal (a ninety-third category was “unspecified”). Based upon the 2011 census, the major languages spoken in Nepal are Nepali, Maithili, and Bhojpuri.