Everest Base Camp trek is considered as one of the most popular breathtaking adventurous Trekking of the world, holding the coveted dream of every wanderer and thrill petitioner.

Everest Region is the roof to ample mountain ranges: Mt. Everest – the highest mountain in the world with an altitude of 8,848.86m along with other beautiful dazzling mountains as Mt. Lhotse, Mt. Makalu, Mt. Nuptse, Mt. Cho Oyu, Mt. Ama Dablam, etc.

Possessing an abundance in snow beauty, the Everest Base Camp Trek is also a habitat for endangered species of animals and birds such as the Red Panda, Himalayan bear, Snow-Leopard, Himalayan Goral, Musk deer, Wild Yak, Griffon vulture & bar-headed goose which adds main attraction on scenic beauty filled with the Himalayas.

Everest Base Camp Trek leads us to the Sagarmatha National Park, the vigorous viewpoint of Kala Patthar where a fashion show named “Mount Everest Fashion Runway” has set a novel record ‘The Highest Altitude Fashion Runway’ in ‘Guinness Book of World Record’, at an altitude of 5,644 meters above sea level on January 26, 2020.

En route to Everest Base Camp Trek, one of the most prominent Tibetan-Buddhist monasteries – Tengboche Monastery (3,867m) welcomes you to roam around the number of monasteries, caves, nunneries, and hermitages offering you the panoramic views of the Himalayas.

Before stepping within the land of the Tengboche monastery, you will get a chance to recreate in Namche Bazaar (3,440m) – the gateway of the Himalayas where you will be able to run errands in nearby stores, internet cafes, and markets. At the identical time, you will get rich hospitality from kind Sherpa people in various lodges, restaurants, and cafes.

The reason for you

Welcome to Nepal! well, upon your arrival at the airport, a representative from Himalayan Connection will greet you and take to the hotel. After having some rest you’ll join to team meet–up and pre-trip discussion about Everest Base Camp Trek. where you will meet your trek guide/leader before the Everest Base Camp Trek start. In the evening Himalayan Connection will organize a welcome dinner with delicious Nepali cuisine and a cultural show.

Be ready for Everest Base Camp Trek.

Beautiful settlement of the Everest Base Camp Trek  route.

Main Attraction: Tough, steep walk,  memorial stupas dedicated to the climbers and trekkers who lost their lives to Everest over the years, amazing views of Mt. Lobuche (6145m) Pumari (7165m) and  Nuptse (7861m), and more.

Main Attractions: Supreme view of Mt. Everest (8848m) with sunrise over the top, spectacular view of Nuptse (7861m) and Lhotse (8516m), and many more mountains and peaks.

Your new adventure experience in Nepal ( Everest Base Camp Trek)  ends today. A representative from Himalayan connections will take you to the airport, 3 hrs. before your flight schedule. we wish you a safe journey to your home and hope to see you soon for your next adventure. 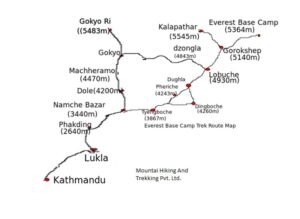 Airport pickup and drop by private vehicle
3-star hotel accommodation in Kathmandu with breakfast
Tea-house accommodation during the trek
All meals (breakfast, lunch, and dinner) during the trek
Domestic flights (Kathmandu- Lukla -Kathmandu)
English-speaking and government-licensed trek leader for a group
One porter for Two guests.
Staff costs including their salary, insurance, equipment, food, and accommodation
All necessary paperwork and trekking permits (National Park Permit, TIMS), All government and local taxes
Medical kit (carried by your trek leader)

Yes, our airport representative will be there to greet you at the airport. S/he will be displaying our company signboard outside the airport terminal. Upon arrival, you will be transferred to your hotel in our tourist vehicle.

CAN I OBTAIN A VISA FOR NEPAL UPON ARRIVAL AT THE AIRPORT?

I have had booked for ABC trip and I got a wonderful experience journey on my first trekking trip. The staff of Himalayanconnections are professional especially (…)